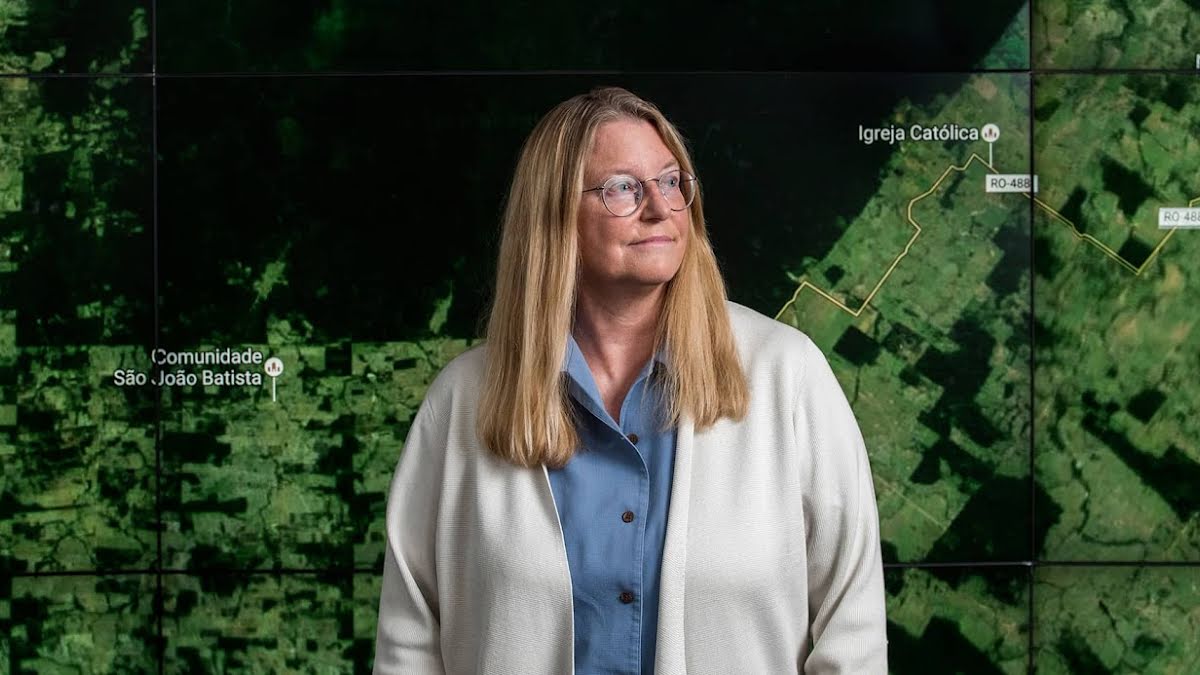 In 2005, a Google engineer named Rebecca Moore got a notice about a logging plan near her home in the Santa Cruz Mountains. The mailing included a grainy black-and-white map that did nothing to show what was at stake with the plan. Dissatisfied, she decided to create a new map using details of the plan overlaid on the 3-D satellite imagery in Google Earth. Moore’s visualization illuminated what was really at stake: where exactly the 1,000 acres of logging would occur, the threats to water and old-growth redwoods, even the narrow mountain roads where logging trucks would be navigating blind curves near kids walking to school.

The map activated the community, and its close inspection of the plan ultimately led the California Department of Forestry to deem the proposal ineligible. That local success was one of the key steps that Moore and the Google Earth team took on their way to meeting a much larger challenge: If the impact to one area could be so quickly and powerfully visualized, could we monitor forest changes in high resolution across the entire globe?

Before 2013, the answer was no. Conservationists have long sought to raise awareness of deforestation and long struggled to do so; the factors that cause forest loss are complex, and information was generally inaccurate, incomplete, and outdated. Forest coverage imagery from NASA satellites had been around for decades, but the data wasn’t high-resolution or globally-consistent, and the hardware that was necessary to view it made it inaccessible to tropical nations, advocacy organizations, and other groups that needed it the most.

The missing piece was a platform that would allow anyone to utilize that imagery without needing massive technical resources. At the 2009 United Nations Climate Change Conference (COP15) in Copenhagen, that piece fell into place when a team led by Moore debuted Google Earth Engine: a prototype that, with Google’s data, storage, and computing prowess, was capable of analyzing global-scale data sets like that long-inaccessible NASA imagery and visualizing “forest change in fractions of a second.”1

This breakthrough caught the attention of Matt Hansen, a remote sensing scientist from the University of Maryland, now a lead collaborator on the project. Before Google’s involvement, Hansen recalls, maps of the earth’s surface were mostly “big, blurry messes.”2 Intrigued by the potential of the Earth Engine prototype, Hansen worked with Google engineers to test the platform on an ambitious swath of land. They chose Mexico, where Google Earth Outreach was launching at the time. The result was a forest map of the entire country whose 30-meter resolution was a thousand times sharper than what anyone else had achieved. After that, the team considered the mapping of the entire globe inevitable.

The key to making it happen was the cloud. Creating a high-resolution map of all land surface on earth takes petabytes of data processing, which require computing power far beyond one machine. To create the global forest map, Earth Engine used a network of cloud-based servers to process 650,000 images across 10,000 computers working in parallel.3 It would have taken a solo computer 15 years to do the job. It took Earth Engine a few days. “When we ran it,” says Moore, “we dimmed the lights at Google.”4

The result was a breakthrough in geographical science. The University of Maryland/Google data set was the first globally comprehensive, hi-res map of forest changes. Unveiled via a paper in the peer-reviewed journal Science in 2013, the platform earned plaudits like “Human Genome Project for the world’s ecosystems”5 for its systematic mapping technique.

To create the global forest map, Earth Engine used a network of cloud-based servers to process 650,000 images across 10,000 computers working in parallel. It would have taken a solo computer 15 years to do the job.

Since debuting its prototype, the Earth Engine team has committed to offering forest-monitoring support for tropical nations.6 To fully realize that promise, it partnered with Global Forest Watch (GFW), a network organized by the World Resources Institute. Building a more robust platform with GFW’s wealth of additional data about logging activity around the world, the map revealed previously unknown deforestation hot spots, including Madagascar, several West African countries, the Mekong region in Southeast Asia, and the Gran Chaco region in South America. Forest advocates were also surprised to discover that in 2012 Indonesia had surpassed Brazil as the global leader in rain forest deforestation.

GFW brings these insights to crucial international climate meetings, and it also actively monitors, researches, and works directly with affected communities, from helping hold corporations like United Cacao accountable to its sustainability promises to supporting forest-friendly legislation, including a bill to protect mangrove trees in the Philippines and a haze treaty to fight illegal fires in Indonesia.

One of GFW’s most valuable assets is speed. Powered by cloud computing, its data is exceptionally up-to-date, and in its ongoing work, the team is producing it in near real time: In 2016, GFW launched GLAD alerts (Global Land Analysis & Discovery), which provide timely tree loss updates. Currently in a few test areas with plans to expand across humid tropical forests worldwide, GLAD alerts make forest loss that used to take years to discover — long after the damage was done — visible in a matter of weeks. With that frequency, plus resolution fine enough to detect even small-holder agricultural activities, forest managers and law enforcement have a fighting chance to protect endangered forests.

3Those images were drawn from 12 years of Landsat satellite imagery, as the initial map tracked forests from 2000 to 2012. The complete Landsat catalog, which is included in Earth Engine, covers 40-plus years of imagery.