Ecologically focused landscapes are coming to life on Google campuses 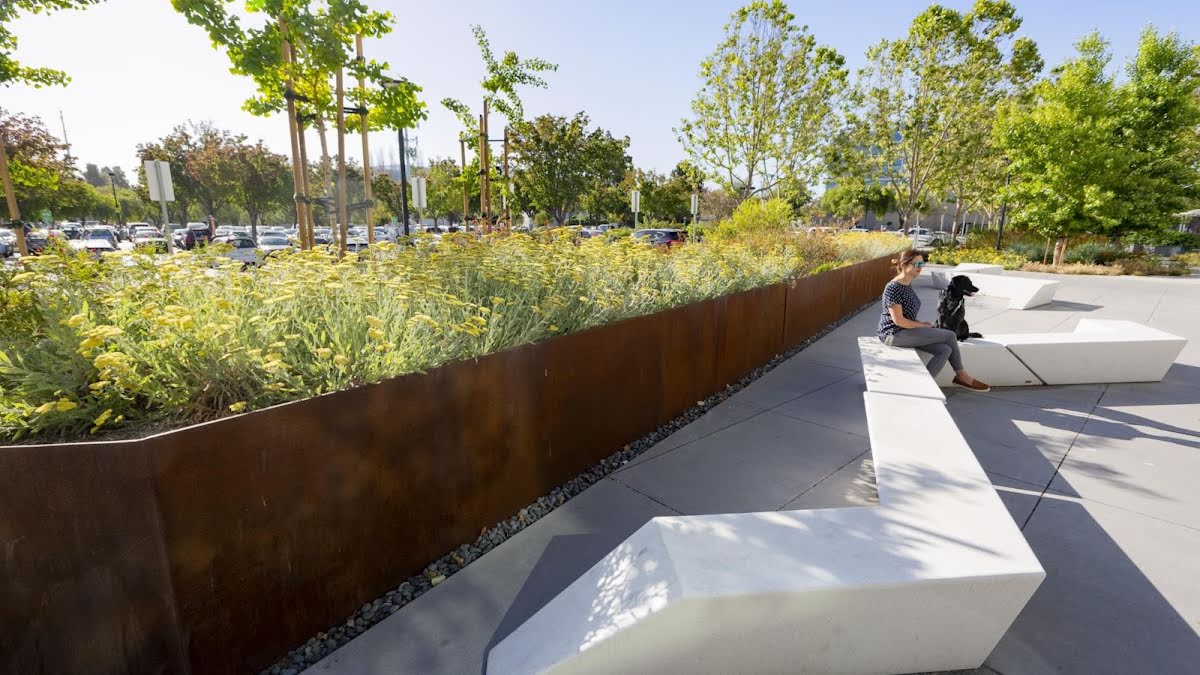 As spring of 2018 arrived, Kate Malmgren found herself admiring a sea of wildflowers in the Charleston Retention Basin on the edge of Google’s Mountain View campus. In collaboration with several internal and external partners, Google’s Ecology Program had participated in a project to expand the basin two years earlier, hoping to enhance wildlife habitat and improve visitors’ experience and connection with nature.

“The flowers were just stunning,” says Malmgren, who has been instrumental in the development of the program since 2015. “We hand-seeded last year, but the seeds got bogged down by the wet winter. This year, the blooms came in and the flowers smelled wonderful. Everything looked so alive.”

The wildflowers and other native plants were chosen for more than their looks, however. Each had an ecological function as well: The wildflowers were on the hook to attract beneficial insects and pollinators that support pollen dispersal and new growth. The expanded groves of willows, known as sausals, were intended to provide lush new habitat for birds, which couldn’t resist feeding on the insects. Oak trees in the half-mile corridor nearby were planted close enough together to pollinate easily and serve as handy stepping-stones for birds flying from one habitat to another.

In short, we chose every flower, tree, shrub, and structure in the basin for its additive value to local ecosystems—part of our efforts to incorporate resilience science into Google’s outdoor spaces. And this was the year our spaces started to intersect in vivid detail.

“We’ve been building for the moment when our patchwork of different projects connected and our ecology story really came together,” says Malmgren, who turned over leadership of the program to Kate Randolph in June 2018. “Our program matured to that point this year. With each project that comes online, we’re helping create a larger resilient landscape in Silicon Valley.”

“Resilience requires the whole system to be connected and interworking,” says Robin Grossinger, who consults on the science of our projects as co-director of the Resilient Landscapes Program at the San Francisco Estuary Institute (SFEI). “Before this year, we’ve seen individual projects succeed, but now we’re seeing the ecological benefits of multiple projects designed in concert.”

Ecological resilience was the goal in 2014 when we launched Google’s Ecology Program. We incorporated cutting-edge science and data from the onset, sponsoring SFEI to create the Landscape Resilience Framework for ecological planning in the region. We also engaged with outside ecologists, landscape architects, planners, and local nongovernmental organizations to ensure that our solutions would enhance the region’s existing ecology over time.

Together, we focused on the following objectives: expand wildlife habitat, create diverse landscapes that can withstand the stresses of climate change, and restore many of the ecological functions lost with the development of office parks across the Valley.

These objectives line up with Google’s larger strategy to emphasize climate resilience across the company. We define climate resilience as our capacity as a business and a community to thrive despite the effects of climate change. In 2017, we released Google’s Principles of Climate Resilience (informed and inspired by SFEI’s Landscape Resilience Framework), a framework to guide our business decisions as Google and the rest of the world adapt to climate-related costs and risks. Designing healthy, biodiverse ecosystems that can endure and evolve with a changing climate is critical to our strategy. At a project level, designing for climate resilience starts with the big picture—the Google Earth view, in a sense. We begin every project by thinking at a regional scale. Which sensitive habitats has the region lost historically? Which habitats make sense now and in the future as the climate changes? How can we establish natural processes to contribute to the resilience of the neighborhood and the larger region?

We then think about the project’s context within the ecosystem. Which plants or species are most important to an ecosystem like this? How would they translate to marshes, creeks, and other existing features?

Next, we address the site itself. What’s required to physically enhance the site? Excavation? Soil replacement or amendment? Finally, we focus on the landscaping, including which native plants offer the highest habitat and ecological values.

Once we’ve built the projects, we study what’s working, iterate, and apply lessons to future projects.

The design of the Charleston Retention Basin allows visitors to experience, learn about, and enjoy the expanded riparian habitat.

Here’s a look at how our landscape resilience principles have come together in two recently completed projects and in one that’s currently under development.

The Green Loop was our first major urban ecology project and inspired the development of Google’s Habitat Design Guidelines to facilitate the application of urban ecological principles to all Google projects. “Google basically put its internal design team and outside ecologists in a room and said, ‘We want you to work hand in hand every step of the way,” says Dan Stephens, vice president of H.T. Harvey & Associates and a lead consultant for Google’s urban ecology projects. “We looked through hundreds and hundreds of native plant species to identify the ones that had interesting foliage, nice growth structure, and qualities that support beneficial insects and birds.”

Many of our solutions centered on creating habitat. In total, we planted 1.4 acres of native vegetation—including California poppies, big berry manzanita, and yarrow—that attract birds and other wildlife.

The site’s native trees include a variety of oaks, which connect the Green Loop with other urban ecology projects such as the Charleston Retention Basin and Charleston East. Oaks once dominated the Silicon Valley landscape. Reintroducing them adds a major ecological boon, as they’re drought tolerant, store large amounts of carbon, and feed a variety of animals—all without taking up much space. SFEI explored the benefits of oaks for local biodiversity and native wildlife in its Re-Oaking Silicon Valley report, which Google funded.

With the Charleston Retention Basin, we broadened our thinking beyond our campus into the surrounding ecosystem. The South Bay was once home to sprawling willow thickets and assemblies of other riparian species, but those valuable habitats have shrunk dramatically as development has encroached. We partnered with the city of Mountain View, HCP Life Science, and LinkedIn to expand the basin, removing 134 parking spaces to help create a larger marsh and willow floodplain. “The larger you make these habitats, the more synergy you create, because birds nesting in the interior have a bigger buffer from disturbances,” Stephens says.

The basin includes expanded willow thickets—which support wetland habitats that sustain birds even during hot summers—along with wildflowers, cottonwood forests, and more oaks. Phase One of the Charleston Retention Basin was completed in 2017, adding roughly 5.9 acres of riparian habitat and 1,800 native trees.

Bay View is one of our newest projects. Still under construction, Bay View sits at the fringe of the baylands near Mountain View and isn’t surrounded by development like our other sites. As such, it’s designed to look and function like a bay’s edge, with large meadows, emergent and freshwater marsh, and one of the largest willow groves ever planted in the region.

“The story of water and land is very much expressed at Bay View,” Stephens says. “One hundred years ago, the landscape featured wet meadows that were seasonally inundated by freshwater coming down through the watershed, fringing into brackish and salt marshes. It was an incredibly rich ecosystem. We’re restoring many habitats that had disappeared completely from the site.”

We added roughly 5.9 acres of riparian habitat and 1,800 native trees to the Charleston Retention Basin (foreground).

When Bay View opens in late 2020, it’s expected to add even more ecological overlap to the patchwork of projects on our Mountain View campus.

“In terms of resilience, there’s a big ecological gap in how cities traditionally work,” Grossinger says. “We have an opportunity with these projects to carry resilience science forward in different ways, shapes, and forms depending on the landscape. It’s a big advance in how we’re applying these concepts.”

Malmgren says resilience planning is part of Google’s own evolution.

“There are clear lines to how our projects connect this year, which lets us approach design in a more holistic way through larger master-planning efforts,” she says. “At Google, we’ve historically retrofitted existing spaces to our health and sustainability standards. Now we have a handful of development projects that we actually own, and we’re making a conscious decision to bring something back to the region that’s ecologically relevant. It’s incredible to see it take shape.”