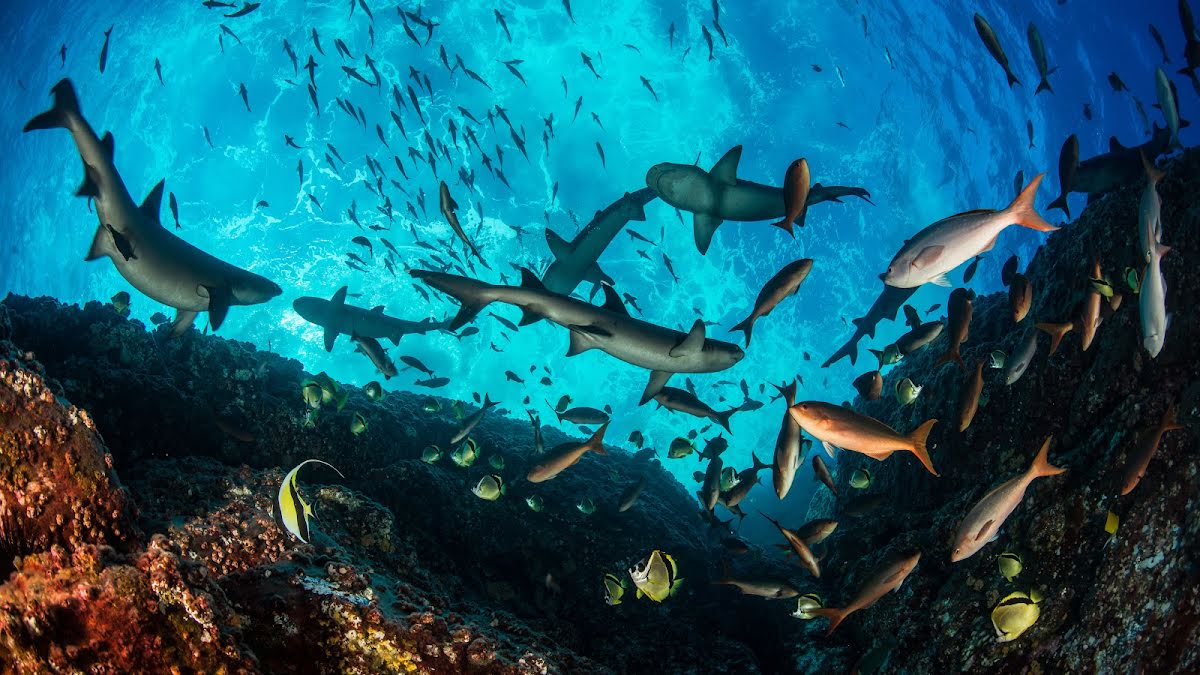 A variety of sharks and giant manta rays migrate freely between the archipelago’s four volcanic islands. Sala describes the rays—which can grow as wide as a giraffe is tall—as friendly and curious, making them a popular attraction for divers. Tuna, groupers, dolphins, humpback whales, and five types of sea turtles all contribute to a spellbinding array of underwater life.

It’s the kind of vibrant ecosystem that animates conservationists like Sala, who fights to preserve the ocean’s last wild places as executive director of National Geographic Pristine Seas. Sala and his team explored the waters around Revillagigedo in 2016, amassing scientific evidence of the archipelago’s potential as a no-take marine reserve, a designation that would ban fishing and other extractive activities.

But it’s also the type of place that’s difficult for governments to protect, as it sits at the thorny intersection of ecosystem health, food security, and fishing economics. The commercial fishing industry’s economic arguments against closing fisheries typically win the day in deliberations.

Until now, thanks to Global Fishing Watch (GFW).

Using GFW’s transparency platform and vessel tracks for the region, Pristine Seas and its research partners were able to see the locations and behaviors of commercial fishing fleets throughout Mexican and international waters. The data gave the Mexican government a clear understanding of who was fishing where and how often, information that rebutted the industry’s claims.

“Global Fishing Watch allowed us to see where different fleets were fishing,” explains Sala, who gave a TED Talk on fishing economics in 2018. “So when the Mexican tuna fishing industry said, ‘We do most of our fishing here,’ we had the data to prove they didn’t. Using GFW was a game changer for us because, for the first time, we were able to bring transparent data to the negotiating table.”

Transparency on the high seas

Using data to shed light on important issues and inform decision-making has long been a priority at Google. In 2014, our Earth Outreach team began applying this same thinking to the oceans, founding GFW in partnership with Oceana and SkyTruth. Our goal was to provide a transparent view of commercial fishing activities across the globe, in hopes of protecting critical marine habitats and providing new tools for sustainable fisheries management for the long term. In 2016, at U.S. Secretary of State John Kerry’s Our Ocean conference, we launched GFW, a public and interactive view of roughly 60,000 of the world’s largest industrial fishing vessels. The platform includes an online map that allows anyone with an internet connection to track fishing activity in near real time, from 2012 up to three days ago.

After a three-month fishing ban, thousands of Chinese trawlers rush out to sea.

The stakes couldn’t be higher. More than 3.1 billion people around the world depend on fish for almost 20% of their animal protein, and fishing helps sustain the economies of dozens of countries. Yet nearly 90% of the world’s fish stocks are overfished or fully fished. What’s more, more than 15% of the world’s fishing catch is illegal, unreported, and unregulated (IUU).1

Here’s how GFW works: At any given time, roughly 300,000 vessels publicly broadcast their location at sea using automatic identification system (AIS) data, a GPS-like broadcast for large seagoing vessels that’s designed as a safety mechanism to prevent collisions. The GFW platform feeds this and other data sources—more than 60 million points of information per day—through machine learning classifiers to determine which vessels are fishing boats, what kind of fishing gear (e.g., longline, purse seine, trawl) they’re using, and when and where they’re fishing based on their movement patterns.

Organizations can use the data however they please, and many are taking full advantage. “We’re seeing entire research labs and government agencies transform their approach to fishery management,” says Brian Sullivan, GFW co-founder and senior program manager.

Fighting piracy in the open ocean

Indonesia Minister of Marine Affairs and Fisheries Susi Pudjiastuti is using GFW data to crack down on illegal fishing activity in sovereign waters.

Already infamous for her take-no-prisoners approach to fishing enforcement—since 2014 she’s sunk more than 380 captured fishing vessels that violated local fishing policies—Pudjiastuti made a bold move of another kind in 2017. That’s when Indonesia became the first nation to make its proprietary vessel monitoring system (VMS) publicly available to GFW.

AIS is required on all vessels over 300 tons, but regulations for smaller vessels vary by region. Indonesia requires its VMS on fishing vessels with 30-ton capacities. This instantly put 5,000 smaller commercial fishing vessels on the GFW map.

GFW spent two years working closely with individuals in the Indonesian government to analyze and process their VMS and understand what was important to them. The collaboration gave Indonesia new insights into Indonesian vessels that were fishing for longer than the three months allowed or in regions where they didn’t have license to operate—all through measuring vessel location and movement.

Research indicates that Indonesia’s marriage of policies and data is working. Foreign fishing in its waters has dropped by more than 90% and total fishing by 25%, and projections suggest that this could allow Indonesia’s fishery economy to flourish as fish stocks rebound.2

Our partnership with Indonesia was the first of several government collaborations for GFW in 2017 and 2018. Pudjiastuti announced the public release of Indonesia’s VMS at the 2017 UN Ocean Conference and called on others to follow the country’s lead. Peru stepped up with a public commitment later at the conference, and Costa Rica followed in May 2018.

Susi Pudjiastuti announced her commitment to the public release of Indonesia’s vessel monitoring system that launched at the 2017 UN Ocean Conference.

To mark World Oceans Day on June 8, 2018, GFW launched two new layers to better understand fishing extents: the first-ever “live” global view of likely transshipping, and nighttime imagery that helps identify vessels operating after dark. Transshipping is a practice in which boats transfer catches at sea, which obscures the source of the catch and can mask illegal fishing activity, smuggling, and even human forced labor. Developed in partnership with the United States’ National Oceanic and Atmospheric Administration, the nighttime imagery processes the Visible Infrared Imaging Radiometer Suite (VIIRS) satellite feed to identify roughly 20,000 boats at night not broadcasting AIS. The imagery provides researchers with new insights into fishery grounds and smaller vessels that were not previously identified in GFW.

The economic and ecosystem benefits of not fishing

In many cases, organizations are using GFW for research rather than enforcement. In its argument against turning the Revillagigedo Archipelago into a no-take reserve, the Mexican tuna industry claimed that banning fishing near the islands would reduce the local tuna harvest by 20%, cost thousands of jobs, and cause the price of tuna on the mainland to skyrocket.

The research proved critical to officials making an informed decision about the future of Revillagigedo. The archipelago was officially designated a 57,000-square-mile no-take National Park in 2017—one of five no-take reserves that Pristine Seas helped establish with GFW research in the past two years.

Researchers are also using GFW to project the potential of proper fishery management. A team at the University of California, Santa Barbara, analyzed GFW to gain a comprehensive view of IUU fishing in Indonesia. Using the data, they showed that curtailing IUU fishing, combined with capping annual harvests at their maximum sustainable level, could generate a 14% increase in catch and a 15% increase in profits by 2035, compared with current levels, without taking a short-term revenue hit. 3

UC Santa Barbara professor Christopher Costello is also working closely with Sala on other potential uses of GFW, including assessing the stock of fisheries based on how heavily an area is fished. “We think GFW opens up the possibility of doing stock assessments from space,” he says. “Since fishermen are great at finding fish, we can study their behavior in near real time and use it to better understand the size of fish stocks around the world.”

GFW is making use of experts’ excitement to create a spillover effect. Its partnerships are fueling the potential of GFW to understand and protect the world’s fisheries for generations to come.

“At the end of the day, we’re able to marry our expertise in massive data analytics and machine learning with organizations steeped in fishery science and policy,” Sullivan says of GFW. “When we launched in 2016, everyone talked about the technology. Less than two years later, we almost take the machine learning for granted, and the discussions have evolved to the science, policies, and real-world impacts.”

Hero image shows the Revillagigedo Archipelago, which is home to one of the planet’s largest concentrations of sharks and giant manta rays. Photo credit: Enric Sala / National Geographic

1 Food and Agriculture Organization of the United Nations, The State of World Fisheries and Aquaculture: Contributing to Food Security and Nutrition for All, 2016, https://www.fao.org/3/a-i5555e.pdf